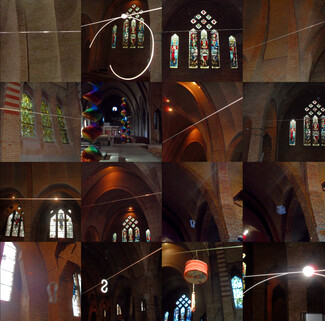 WAVES is an ongoing research project by Dutch artists Petra Dubach & Mario van Horrik that involves so-called shakers, a kind of loudspeakers that reproduce sound frequencies as vibrations, attached to long strings. Started in 2010, the project has so far produced a number of installations and concerts, some recordings have been published previously on Edition Telemark as a double 12" in 2016 (cat. no. 628.01).

For a few weeks in 2016 and 2017, Dubach and van Horrik had the chance to work on WAVES in the former Church of the Holy Heart in their hometown of Eindhoven where they stretched two 50 meters long strings between columns of the building and placed a piëzo transducer on one end and a shaker on the other end. Using this setup, they developed three different systems for generating feedback, spawning numerous experiments and recordings, a selection of which is presented on this LP. Video recordings of the process are enclosed on a DVD, showing the building and the strings as well as performances by Petra Dubach where her body and movement influences the standing waves in the space and thus the sound.

Edition of 200 in full-color sleeve with photos from the church and liner notes by Petra Dubach, Mario van Horrik, and Ruud Post. The DVD is enclosed inside the sleeve.

"All our experiments didn't have any plan as a basis; the sounds of one setup resulted in changes for the next setup. This could be: changes of drivers, adding or removing preparations, changing position of the recording device or the external driver, changing parameters of the mixing board or amps, or changing nothing at all: through the vibrations of the strings the preparations were more or less slowly transported across the length of the strings; sometimes forward, sometimes backward. We have made recordings of this process of more than one hour where the sounds constantly change under the influence of this transportation. But sometimes the movement would end in a fixed state." (from the liner notes)

Side A
1. Surfing TGV
2. Last Breath Choir
Side B
1. 360 bpm = 6 Hz (and more)
2. Hesitating Bells
3. Cymbalwave
4. Grinding
DVD
1. The building
2. The installation
3. Interactive (the influence of a moving body on the standing waves in the space)
4.–7. Interactive performances (system 3)
8. Church WAVES performances