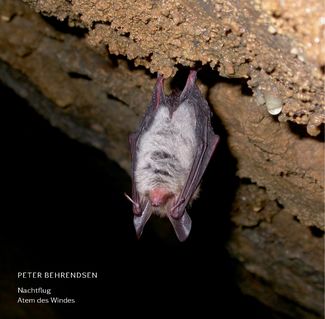 Peter Behrendsen (b. 1943) is a Cologne-based radio producer, performer and composer of experimental music. He started concerning himself with electro-acoustic music in 1972, was a member of Josef Anton Riedl's ensemble and assistant to Klaus Schöning at the WDR radio play studio (Studio for Acoustic Art). In Cologne, he organized numerous concerts and festivals for experimental music, most notably BrückenMusik, a series of concerts in the box girder of the Deutz bridge. He regards John Cage, Alvin Lucier, Jackson Mac Low and David Tudor as his most important teachers, with whom he also collaborated, and has performed his own live-electronic and text-sound compositions throughout Europe.

This LP pairs a live-electronic and a text-sound piece: "Nachtflug" (Night Flight, 1999) is based on electronic treatment of the sounds of bats made audible, and is performed by hans w. koch and Behrendsen. "Atem des Windes" (Breath of Wind, 1999–2005) is a text-sound composition on the subject of the wind, inspired by a Taoist text by the Chinese philosopher Zhuangzi, and features the voices of Bettina Wenzel and Behrendsen. Edition of 300 in full-color sleeve and inner sleeve.

Side A
Nachtflug
Side B
Atem des Windes