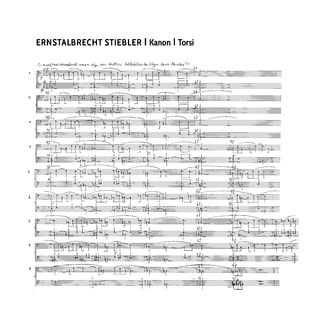 Ernstalbrecht Stiebler (b. 1934) is a German composer of minimalist and reductionist contemporary music. His name is still most closely associated with his long-time position as radio editor and producer for New Music at the Hessian Broadcasting Corporation (Hessischer Rundfunk), but his own compositional oeuvre – beginning in 1955 and continuing until now – has in the recent years attracted more attention with various concerts and several releases.

Having attended the Darmstadt International Summer Courses for New Music from 1958 onwards, Stiebler decided in 1963 to leave serial music behind and instead opt for his own reductionist style built on minimalist structures and repetitions, though not in any way related to the so-called Minimal Music but rather influenced by Minimalism in visual art. In terms of composers of his time, the closest stylistic relationship that could be drawn is that to Morton Feldman. Stiebler's approach is best summarized in his own words: "Music is too important to burden it with emotions."

This LP pairs two organ-based works: "Kanon" (1980) for organ, electric organ and wind instruments, and "Torsi" (2002) for organ in three movements: "Torso", "Organa minima" and "Cantus". The latter recording, made at St. Stephen's Church in Konstanz (organ: Hans-Peter Schulz), was previously released on CD by m=minimal. "Kanon" is so far unreleased. Edition of 300 in gate-fold sleeve including an extensive interview conducted by Jens Strüver about Stiebler's compositional views and techniques.