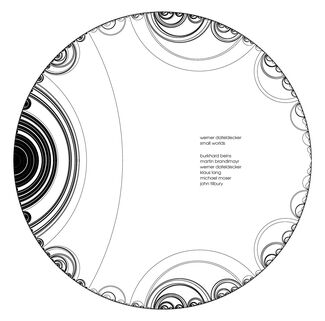 "Small Worlds" (2004) a is 42-minute composition for improvising sextet by Austrian double bassist, composer and improviser Werner Dafeldecker. The score is written for any instrument and divides the players into two virtual trios whose constellations change every 3 minutes. No restrictions are made regarding material or playing techniques, the only specification is that in each 3-minute trio, one player has the role of the "dynamic leader" which means that no other player within the trio should play louder than the one on that leading position. Apart from that, the only other restriction concerns how pauses are to be made when two players interchange their positions within the trios.

According to Dafeldecker, the object of the piece is to provide a structure that doesn't curtail the qualities of the musicians, yet forces them to listen very closely to each other and make focused decisions about parameters that are often overlooked in completely free improvisation. Especially, the given structure avoids the emergence of certain clichés that are often present in Free Improvisation, while retaining a very high level of openness with regard to how the piece is performed.

The first published recording of "Small Worlds", by Australian ensemble Quiver, was released in 2017 on CDr by Tone List. This LP contains a recording made in 2004 at Taktlos Festival in Basel, Switzerland, that features the line-up that Dafeldecker originally had in mind when he wrote the piece: Burkhard Beins (percussion), Martin Brandlmayr (percussion), Werner Dafeldecker (double bass), Klaus Lang (organ), Michael Moser (cello), and John Tilbury (piano). Partly, this constellation later also played together in the long-running avant-garde group Polwechsel.

Edition of 300 in regular sleeve with three inserts: two featuring an extensive conversation between Werner Dafeldecker and Matthias Haenisch discussing "Small Worlds", Polwechsel and Free Improvisation in general (German and English), the third reproducing the score of the piece.